Through the Liszt biographer La Mara we know the contents of sixteen letters[1] from Caroline to Liszt and his partner Princess Carolyne Sayn-Wittgenstein.

In a first letter dated July 23, 1853, Caroline wrote plaintively to Liszt: “Do you still remember me?” She planned to visit Paris to seek medical care for her daughter Berthe who had been suffering from various adolescent illnesses. She hoped to meet Liszt in Paris later that summer. Due to the sudden illness of her father Count Pierre de Saint-Cricq and her husband Bertrand, Caroline could not arrive in Paris sooner than October 25. She wrote that she would contact Liszt’s mother “of whom you no longer write me” when she arrived in Paris, to find out about Liszt’s and the Princess whereabouts.

Caroline addressed her first three letters to Liszt. He responded to her first letter but left the response to all her other letters to Princess Sayn-Wittgenstein. Confronted with these letters from Caroline, the Princess asked Liszt who this woman was. Liszt wrote her a few lines in two of his letters[3].  In March 1854 he briefly explained the situation with Caroline’s father (see section on Liszt’s depression) and added:
“I hope that sooner or later, chance will bring us closer to Caroline. She is the only person I would like you to meet. It will be good for her to know you and it will also be pleasant for you. Please write her at some length. You know so well how to speak and to write – in which I am rarely successful, unless you help me, otherwise I get frustrated.”

The Princess probably asked additional questions, so Liszt added a PS to a letter to her in August 1855: “You know what deep feeling I had for Mme. d’Artigaux – so talk to her about me as you deem fit”.

The Princess sent several letters to Caroline in 1854, but received only one letter (written on December 6th). Here, Caroline referred to an event that had “shattered her life”, and her inability in her state of depression to explain it to the Princess. We know this event was the death of her father Count Pierre de Saint-Cricq (February 1854). Caroline apparently didn’t feel close enough to share this information with her, even though we know that, encouraged by Liszt, the Princess shared some quite private information in her letters with Caroline.

Another effort to meet was in the summer of 1855. The Princess managed a brief visit to Caroline. Caroline wrote that she counted on seeing the Princess again in September, but the Princess had more pressing activities. We learn this from a letter[4] that Liszt wrote to Sayn-Wittgenstein on September 13 that year:

”There was nothing wrong with the small setback of your missed visit to Caroline and you’ve done well not to cancel the Delacroix farewell party, nor the dinner with Scheffer.”

Liszt continued about the impossibility of meeting all one’s friends and acquaintances, as well as all the other obligations in Paris, and the fact that one had to make choices. His next lines defined the position of Caroline in his life, indicating that she was no longer of importance to him.

“This is what made me put aside the « serious men », as Mme d’ Agoult called them — which to me were of no use to my position at the time. For you, I urge you to focus on art, and artists above everything else.”

From Caroline’s letters we know that she visited Paris seven times between end 1853 and end 1859 to seek medical advice for Berthe and/or herself or to assist dying friends. Liszt lived in Weimar at this time and was not present during any of these visits. Together with the Princess, Caroline and Berthe met Blandine, Cosima, Daniel and Marie (Sayn-Wittgenstein) a few times, after which there was an infrequent exchange of letters between the children. Caroline also paid a visit to Liszt’s mother[5] (October, 16, 1859) but did not find her at home and didn’t leave an address.

Caroline invited the Princess and Liszt to visit her at Pau. The new train connection allowed for a much faster (24-hour) journey. Given Caroline’s earlier letter about a cholera epidemic in Pau this fact must have lessened the appeal of a visit to Liszt and the Princess. Caroline’s last letter in La Mara’s archive dates from February 15, 1860. In this two-page letter, Caroline included a few lines offering her condolences on the tragic death of Liszt’s son Daniel, and spent the remainder on her own sorrows and illnesses.

In May that year, Princess Sayn-Wittgenstein moved from Weimar to Rome to ask the Pope to allow her to divorce her husband and marry Liszt. Liszt joined her there seventeen months later in October 1861, planning to marry her on his 50th birthday, but the wedding was cancelled after a last-minute successful protest from Wittgenstein’s husband. They both stayed in Rome and it was this move that probably ended the contact with Caroline. 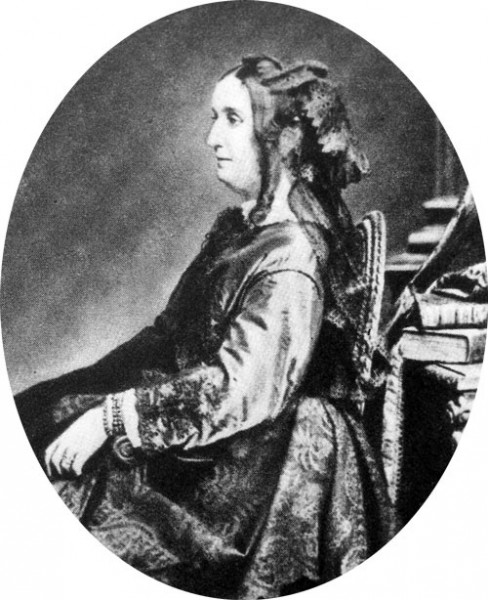 Apart from kind and somewhat exalted[6] words for the Princess, the children and occasionally for Liszt, the majority of Caroline’s letters were filled with complaints about her and/or Berthe’s health for which they sought extensive (and expensive) spa treatments. Caroline’s husband Bertrand only needed home treatment on the three occasions[7] he had been ill. This negates stories about Caroline running an infirmary for her husband. Princess Sayn-Wittgenstein replied to these plaintive letters in a friendly way, but one certainly cannot speak about an intimate friendship as is suggested by some biographers.

Two hitherto unmentioned aspects stand out in these letters.

Caroline was last mentioned twice in Liszt’s letters: The first time in Liszt’s testament-letter[9] written to the Princess Carolyne Sayn-Wittgenstein on September 14, 1860.

Liszt wrote: “One of my jewels set as a ring is to be sent to Madame Caroline d’Artigaux, née Countess de St. Cricq (at Pau, France).”

This line is probably the most quoted item about Caroline by Liszt’s biographers and supposedly tells a tale about the eternal love between the two. The perspective changes if we realize that this one-page testament-letter, used for publication in a German magazine in 1897 and reprinted by La Mara, was a much truncated version of Liszt’s original sixteen-page will[10]. Besides Liszt’s closest family this original will listed many other friends and musicians to receive similar keepsakes. In this will, Caroline was mentioned at the very end, as an afterthought: “Lastly, I also ask Carolyne to send Madame Caroline d’Artigaux, née Countess de St. Cricq (at Pau in France), one of my talismans mounted in a ring, [ … ].” The word “lastly” places the position of Caroline with Liszt in a more proper perspective.

Liszt’s mentioning of this talisman mounted in a ring makes one wonder if this could have been the piece of jewelry (see previous section on Liszt in Pau) he planned to have sent to Caroline in 1845? Perhaps it never reached his former love (there are no sources indicating that Caroline sent a thank-you letter) so it stayed in Liszt’s possession? If so, Liszt obviously wanted to correct this omission, hence the reason to include Caroline in his last will.

Caroline did not make a will. Apparently, there were no items that she wanted to bequeath to Liszt such as the ring that, according to biographer Guy de Pourtalès, was given to her by Liszt during their romance in 1828, engraved with his motto: “expectans expectavi” [11]. At her death, all her belongings transferred to her husband Bertrand and to her daughter Berthe.

The last time that Liszt mentioned Caroline was when he heard about her death in 1872. On May 9th that year he wrote from Weimar to the Princess[12] in Rome:

“She was one of the purest manifestations of God’s blessing on earth. Her long suffering, endured with so much Christian meekness and resignation, matured her for the heavens. There, she finally entered the joy of the Lord, where the world will not touch her and where infinity alone was worthy of her exalted soul. God shall be thanked to have called her from her earthly exile and that by her prayer she will obtain for us the blessing to stay united.”

Next: Siren with a heart of ice

[6][↑]     This exalted wording was common in the mid 1800’s, especially for southern cities like Pau that were far more religious than decadent Paris. Multiple similar examples of this wording can be found in other letters to and from Liszt and his contemporaries.