When reciting his Franconnette, Jasmin sang the “Siren with a heart of ice” song to a melody that he composed himself[1]. Liszt named his Faribolo Pastour composition after the first line of the song, rather than using Jasmin’s title. Here are Jasmin’s original score and lyrics. 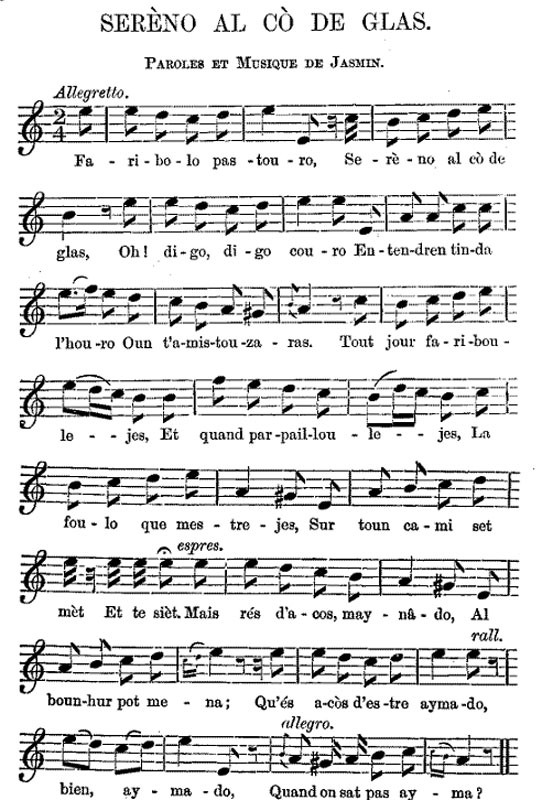 Given Liszt’s stunning qualities as composer and improviser, being able to play complex works from memory after merely browsing through the score or overhearing it, it would not have taken him more than a few hours to produce his arrangement of Faribolo Pastour and Pastorale de Bearn. For both works, Liszt’s improvisation basically consists of a rephrasing of their original melody, followed by a variation in typical Liszt bravura style.

A more elaborate version of the Jasmin’s Faribolo Pastour (Serèno al cò de glas) song was published by Jasmin as a melody with accompaniment in the volume Chansons de Jasmin[2], where it was bundled together with two other songs, Me Cal mouri (1822) and Lou Poutou (1837). The song, now in ¾ time, starts with a Recitativo prelude followed by an Allegretto in Tempo di bolero. This version, which is in the possession of the author of this essay, wasn’t published at the time of Liszt’s visit to Pau, since Liszt’s arrangement follows Jasmin’s original melody.

Liszt sent his Chansons du Bearn by mail to Paris after his concerts at Pau. The publication was done by the Bureau Central de Musique in Paris in 1844[3]. According to Ramann they were published in 1845 by Schotts Sohne, after Liszt’s return from his concert trip. Although dedicated to Caroline Dartigaux, there is no indication that she ever heard these compositions other than as improvisations at Liszt’s Pau recital. In fact, in a letter[4] to Carolyne Sayn-Wittgenstein from 1858 Caroline stated about Liszt: “one of the regrets in my life is not to have known the fruits of his work”.

Besides Liszt’s Chansons de Bearn compositions that were written in Pau, some Liszt biographers place the creation of Liszt’s song Ich möchte hingehen, based on a poem of George Herwegh, also at the time of Liszt’s meeting with Caroline. Liszt named this composition a “testament of my youth” and it thus might have been inspired by the romance. Unlike with Faribolo Pastour, however, he did not dedicate this song to Caroline. Furthermore, if there was any person he had amorous feelings for during his 1844 concert tour it was Lamartine’s lovely niece Valentine whom he met in July that year and proposed[5] to when he met her again in 1845. The date indication for Ich möchte hingehen is 1845, probably composed after Liszt’s concert tour to Spain and Portugal and not in Pau, thereby shattering another romantic fable. Other songs composed in these years, such as Du bist wie eine blume, Was liebe sei, or Ins liebeslust could also be applicable to Liszt’s love for Caroline, but he did not dedicate any one of these to her.

Next: Caroline in later life