Biographers generally depict Caroline as deeply religious. There is significant evidence, however, that she was a lively person engaged in many worldly activities and she was certainly not a grass widow. Documents from the 1840’s show Caroline playing a key role in organizing and maintaining the Dartigaux Salon in Pau initiated by her popular father-in-law. At this salon, she welcomed and entertained people of note, irrespective of their opinions or nationality, to musical, literary, and dance events, including dressing-up parties [1]. She also conducted business affairs for her family, such as the purchase and sales of family estates[2]. 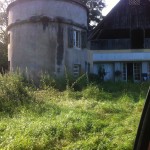 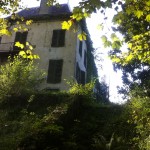 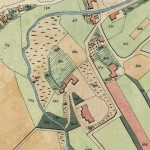 The two images on left, one of the Pigeon tower and one of the South section of the old St-Cricq castle in Sus were made by author while being chased by unfriendly dogs of the equally unfriendly guardian, summer 2011

Caroline later had built a country house just south of the town of Sus (“Sus-Les Bois” or “Maison Nitot”) on a large lot of land some 2 km from her old family castle. The circular tower was added in the late 19th century. 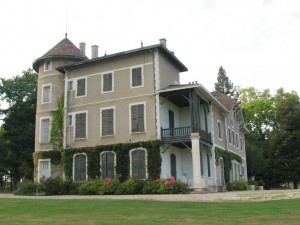 After Wellington’s occupation of the area during the battle with Napoleon in 1814, Pau became a favourite spring and winter residence for the English. The marriage of Caroline’s brother-in-law, Edouard Dartigaux, to the English Catherine-Dorothée Hill (on Dec. 8, 1833) gave an additional boost to the popularity of Caroline’s salon. Catherine’s father, Lord Hill, had been Wellington’s second-in-command during the war. Their home, Hôtel d’Esperbasque, next door to that of the Dartigaux family, was even grander than the Saint-Cricq hôtel. Caroline’s fluency in English, a rarity in the Pau area in those days, enabled her to welcome them to the events at her salon and broadened her outlook.

The Bulletin of the Society of Science, Letters and Arts in Pau writes:
“The Salon of Mme Dartigaux was open to all notables that were attracted to the charm of our wonderful climate in Pau, and so was the door to all misfortunes seeking her inexhaustible charity.”

The weekly get-together at the Salon was on Monday nights. Records from those days show that Caroline danced with the Royal Prince (Duke of Montpensier and youngest son of King Louis-Philippe) during the three-day festivities, organized when he visited [3] Pau in August 1843 to inaugurate the statue of Henri IV at Place Royale. 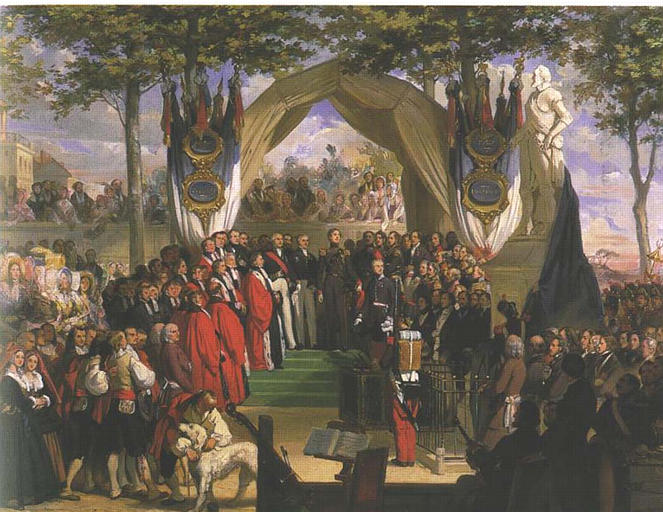 Another party was organized when the Duke, who got married in Madrid to Marie-Louise- Ferdinande de Bourbon (sister of Spanish queen Isabelle II), stopped by at Pau in 1847. Also on this occasion, Caroline danced with the Duke.

Pau was a place where the search for amusement never tired so the arrival of a foreigner was a reason to throw a party.
In his book on the society and manners of the Bearn, Gustave de Lagrèze writes:
“Mrs Dartigaux wonderfully honoured the Salon of the first president who united all society of Pau, irrespective opinion nor nationality. They did not dance every evening, one should’t think that. They varied the pleasures in the salon of Mr le Premier, and it was the time when the foreigners started to flood Pau. The arrival of a notable personage was an event. One evening, they announced a German baroness. Despite her very pronounced accent, she charmed by her spirit. A Basque, who had travelled in Germany, believed to recognize the wife of one of his friends, and nothing is spared to confirm his error… In fact, the pseudo-German was the Viscount of Beaumont disguised as a woman.”

Furthermore Caroline brought the citizens of Pau together by supporting her husband and father-in-law in organizing charity events and concerts (including a “carnaval très animé”) with other salons such as the one of Lady Sarah Fitzgerald.

From various articles in the local newspaper Mémorial des Pyrénées [5] we observe that the Dartigaux family hosted foreigners at their home as well as craftsmen trading in art and fashion, they donated significant funds to charity, and participated in a committee for the planning of the railroad to Pau. Next to his business and social activities, Bertrand indulged in horseracing. In September 1853 [6], Caroline bought a house across the street from their hotel, probably for her daughter Berthe who would be turning nineteen the following month. However, life at the Salons became less exciting in the second part of the 1850’s: a coup d’état caused significant changes in local government, and an earthquake and cholera epidemic claimed many victims. There were regular charity activities arranged by both Caroline and Bertrand up to the late 1860’s.

The close family ties between the Dartigaux and Saint-Cricq families were further evident by the key role that Caroline’s brother-in-law Edouard played in the announcement and registration of the deaths of several members of the family, such as his father Antoine, his father-in-law Pierre, and Caroline’s elder brother Auguste. Edouard himself died in Pau on February 20, 1867.

Caroline and Bertrand stayed together until her death, even though each of them spent time apart at their country homes in Sus and Moncayolle during summer. From her death certificate [7] we learn that Caroline died at 2 a.m. on April 15, 1872 at her home in Pau and was buried on April 17 in the cemetery[8] there. Bertrand spent the major part of his retirement at his family estate near Moncayolle, where he and his brother Edouard imported English pedigree Southdown sheep to improve the quality of the sheep in the Bearn region. As the son of a sheep superintendant, Liszt would have appreciated this! 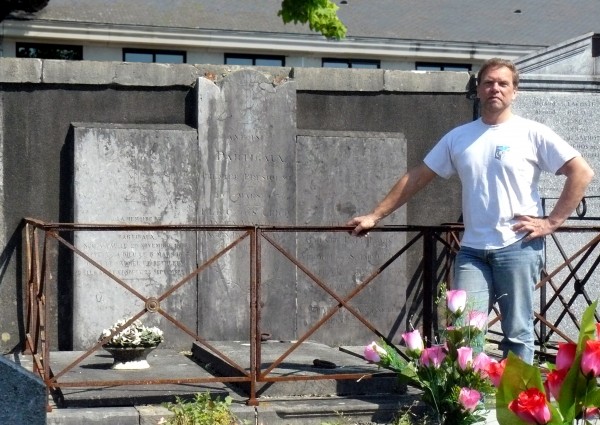 Bertrand died on his estate on April 5, 1875 [9] and was buried at the Moncayolle cemetery. Despite his love for horses and horse racing, there were no horses available in this rural area to carry his coffin to the Moncayolle cemetery, so Bertrand’s body was transported to his last resting place by a cow-drawn carriage. One source[10] hints that Bertrand may have had affairs with other women. Given Liszt’s many affairs with other (married) women, this is not something we can hold against Bertrand Dartigaux. The same source also states that Bertrand held the key to one of Caroline’s favorite clocks in his hands when he died and stipulated in his will that he wanted this talisman to be buried with him: a clear sign of his affection for Caroline.

Several Liszt biographers[11] indicate that the marriage between Caroline and Bertrand was unhappy; this cannot be confirmed from any source and is probably based on wishful thinking. In each of the sixteen letters that Caroline wrote to Liszt and Carolyne Sayn-Wittgenstein she complained about her health and that of her daughter Berthe. She only mentioned Bertrand three times in relation to tending to him during illnesses. She referred to him affectionately as “my husband” in one letter[12].

After Bertrand’s death in 1875, his daughter Berthe inherited the family fortune and spent it all to support the church and eventually lived with the Carmelites although she didn’t join the order. The wealthy Berthe played a key role in establishing a Carmelite community in Bethlehem through a privately held audience with the Pope in 1875. She sold the majority of the family properties in 1879, including Hôtel Dartigaux, to fund this activity, subsequently moving to Palestine[13] where she died on March 5, 1887. Her body was buried near the monastery, but a memorial plaque was installed in her honor at Pau cemetery.

Despite several sources pointing at the Dartigaux family burial vault at Pau cemetery as Caroline’s last resting place, a tombstone for her does not exist. Town hall annals do hint at the remains of a female being buried in the vault, but nothing formal has been recorded. The author assumes that, in the late 19th or early 20th century, Caroline’s stone had been replaced by the memorial plaque for her daughter Berthe.

[2][↑]     The map (2nd right) is from 1807 (archives Pau). The B/W image of the main building on right side is courtesy of Mme Marie Baulny-Cadilhac at Pau, who published her views on the person of Caroline de Saint-Cricq and her Liszt romance  in Un amour impossible, Editions du Cercle Historique de l’Arribère, Navarrenx, Maison Nitot, Caroline’s country house is presently owned by an agriculture institute (SCAP – Société Civile Agricole Pyrénées) who uses it for private conferences.

[4][↑]     A painting of the inauguration was made by Eugène Devéria, courtesy Musées de Versailles & Château de Pau. There’s a good chance that Caroline, as wife of a key magistrate, was depicted in this painting by Devéria. Eugène was the younger brother of Achille Devéria who also was a painter. Achille became famous for painting the Parisian aristocracy such as Alfred de Musset, Sainte-Beuve, Lamartine and… Liszt.

[10][↑]    E.g. Léon-Bérard, op. cit. 4, p. 692.
Extramarital affairs were not uncommon in those days when men were at their office or at the gentlemen’s club, and women stayed at home and managed the household. English expats in Pau were surprised to find that husband and wife spent little time together.

[11][↑]    E.g. La Mara: “Caroline de Saint Cricq” in Liszt und die Frauen, Leipzig, Breitkopf & Härtel, 1911, p. 3 – 9, This book also provides a rich sample of exalted words used by Caroline, without mentioning that this style or writing was quite common in those days.